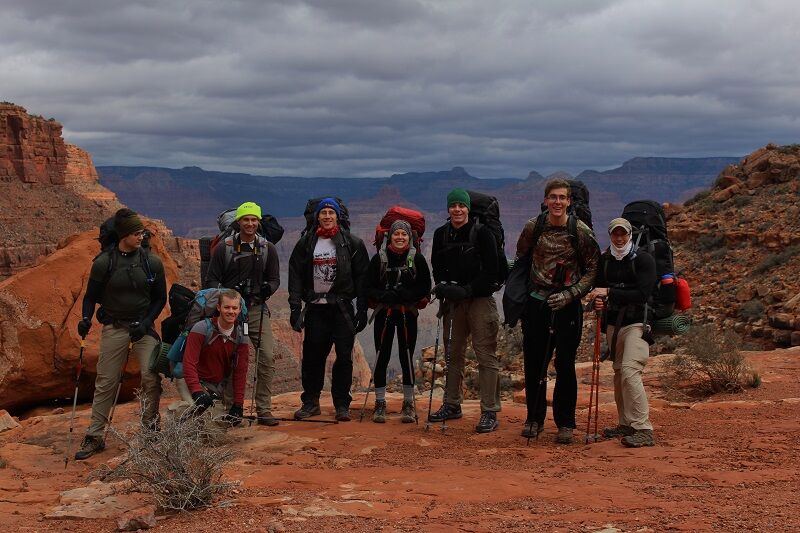 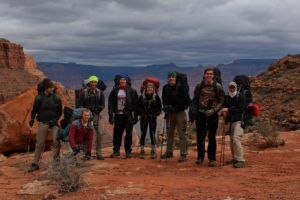 For a moment, the laughter turned to snorting. Bellyfuls of laughter. Rocking back and forth trying not to pee your pants kind of laughter.

The darkness had enveloped the canyon floor. We hadn’t seen the sun nearly all the day and definitely not late when she shielded herself behind the mesa top blocking our view from the western descent. What we could see was flecks of snow lacing a red wall that climbed higher than from where we sat.

Already, we had explored a stunted cave with white ashy material that is likely closer to a mold, mildew or fungus. Building on the interior walls, the evolving growth is hidden from daylight but not from the occasional visit of human or critter. Half of us climbed the rocky eastern edge of our canyon abode. At the top, we paused to consider that we had to descend that which we had climbed. Ascending these rocky slopes is nearly always easier than the sweat laced descent that could easily result in scratched knees and torn britches … at the very least.

Groups of students begin as an unknown. Gradually, personalities emerge revealing confidence or apprehension. Sometimes both. Sometimes neither. Individuals bisecting their way in the classroom and work place gaining knowledge and skills. A generation of enthusiasm and ability to make the world a better place for both their generation and the generation that follows.

Clouds break apart steadily revealing first a solo star before a pin poked blanket that shines distant light from a distance nearly imperceptible. As the pinholes increase, the temperature descends the unseen scale and jackets become zipped, gloves cover unshod hands and hats are pulled further down ears and foreheads. The giggles turn to more sincere conversation as the two days that have passed are evaluated for purpose and intent. Goals are simplified, in both reality and opportunity. Finding an inner quiet. A priority that can be taken to the next stage of what happens as the canyon. A priority of perspective that can be taken home and practiced as important in daily living.