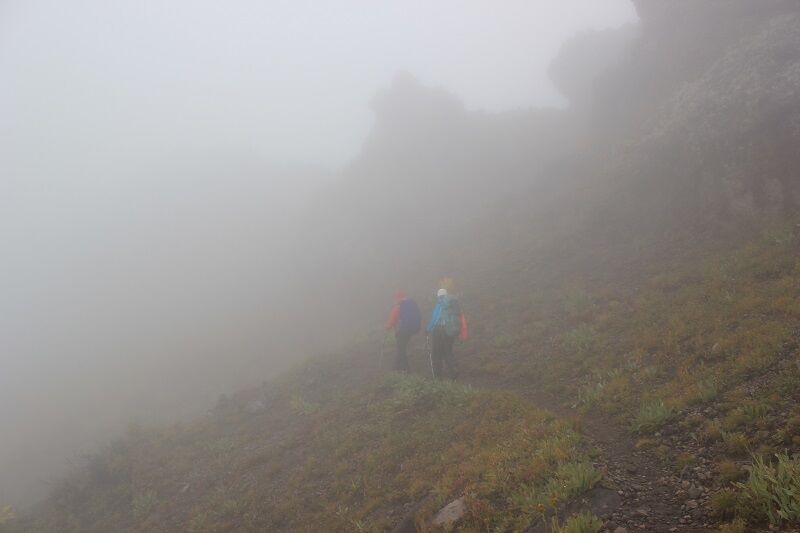 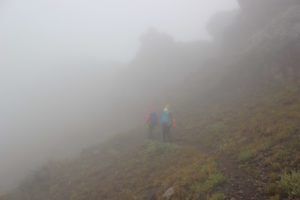 Soggy. During monsoon season there are occasions when rain, and thunder, and lightning play a game that only warriors of the Greek gods appreciate. I slept well until 2 am when the onslaught really thrashed. For the remainder of the wee hours of the morning sleep eluded. The fly of the tent shuttered in the wind and turning on the head lamp revealed ominous shadows on the mesh insides. Now and again I thought the worst had passed but I was wrong, or it was hopeful wishing, because the next rainy tantrum lasted for a long time.

At 6 am I will still dry, comfy in my sleeping bag and pondering heating water for morning mocha.

Giggling came from the other tent. Then I heard assessing damage I worried. Inquiry revealed that assessing damage was related to a wet boot – whatever a wet boot means. Then I heard there was more water damage. No be fair, this is no surprise. Overnight the winds gusted regularly changing directions with each new torment of rain. The blitz would arrive after the highest gusts of squalls subsided – the winds were always the warning – followed by a drenching downpour that just before conclusion would rage tornado style circular winds. Nothing was safe from the damp feeling. So, I expected that the assessing damage would merely reveal that everything had that damp feeling.

There was a delay in preparing mocha as another wave of rain began tumbling from a gray mist of clouds that surrounded our tents, the view, the entire landscape. As a whole the tent fly keeps out the watery droplets – after all that is its function. The interior mesh, with all of its miniature holes does not function to hold water droplets but in adverse situations the mesh will repel water only until each little hole is full, has reached its maximum capacity.

By the time the thunder stopped, nearly five hours later, the mesh could no longer hold the liquid and it began spraying the inner confines with something greater than a fine spray. Now, there were decisions to be made and long ago the giggling had ceased.

For a brief moment I heard two birds call. The landscape, at least what I visualized through the gray fly, brightened as the sun rose on the distant horizon and passed the rocky elongated ridge past my feet.

Finally, I could talk to the girls and assessing damage revealed that thermarests were floating in something resembling a swimming pool. One boot was left outside in the rain. Sleeping bags were somewhat damp.

Donning raingear I emerged to see that in fact there existed a nearby swimming pool with an oversized yellow tent and its two vestibules submerged more than a tent should be. We set up a tarp that would provide shelter for a late breakfast and much needed warm drinks. The decision was easy to make – it was time to head down, beneath the line of clouds and into a less wet landscape. But first, how do you pack a flooded tent?