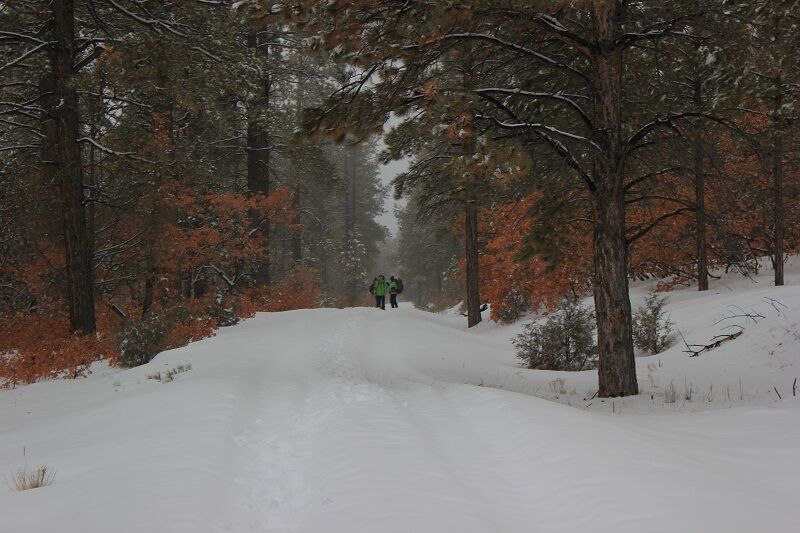 The Winter Desert:  This route is a Q-tip route that begins just past a crossing of the Rio Chama National Scenic River in New Mexico.  The route is initially broad and flat with easy walking for several miles through pinon pines and sagebrush with views to banded cliffs and mesas.  Eventually, the designed trail meanders into the narrow valley of Ojitos Canyon amongst mixed conifers and sandstone cliffs.  An earnest climb will reach the 8,000-foot contour of the Mesa del Camino where an old road encircles the mesa flanked with grassy meadows and ponderosa pines.

The Chama River Canyon Wilderness was designated in 1988 to compliment the adjacent Chama Wild and Scenic River, also designated in 1988.  The 50,300-acre Wilderness and the 24.6-mile stretch of river, running between El Vado Reservoir and Abiquiu Reservoir, are two components of a collage of public lands collectively called the Rio Chama Corridor, administered by several federal agencies that include the Santa Fe and Carson National Forests, the Bureau of Land Management and the U.S. Army Corps of Engineers.

Adjacent to the northern boundary of the Chama River Canyon Wilderness is the 11,985-acre Rio Chama Wilderness Study Area, administered as Wilderness by the BLM.